“I have been informed by the parties that they have come to a resolution,” Burroughs said, adding, “They will return to the status quo.”

The latest development cancels a move U.S. Immigration and Customs Enforcement (ICE) announced last week that international students whose courses move entirely online would be required to depart the country or transfer schools and reinstates an earlier plan to grant exemptions to student visa holders.

In March, as the government scrambled to prepare for the public health crisis, ICE offered a reprieve to student visa holders, who are normally required to attend in-person classes to remain in the country.

ICE reversed itself with little warning last week, saying that any student visa holders in the U.S. would have to leave the country if their schools held classes entirely online.

The Harvard-MIT suit asked a federal court in Boston for a temporary restraining order and permanent injunction against the administration’s new policy.

The universities accused the administration of committing several violations of a federal law known as the Administrative Procedure Act (APA), which concerns how certain decisionmaking power resides with federal agencies. At issue was whether ICE’s new policy was legally justified or if it was “arbitrary and capricious” and thus illegal under the act.

The lawsuit leaned heavily on the Supreme Court’s decision last month to block the administration’s plan to end the Obama-era Deferred Action for Childhood Arrivals program. In that case, a majority of the justices found that the government did not provide adequate justification for the policy decisions as required under the APA.

The rescission announced Tuesday marked yet another stunning twist in the Trump administration’s approach to student visas amid the pandemic. As of Monday, the administration maintained it had exercised its lawful discretion to change its policies regarding student visas.

The Department of Homeland Security, which oversees ICE, did not immediately respond to a request for comment. 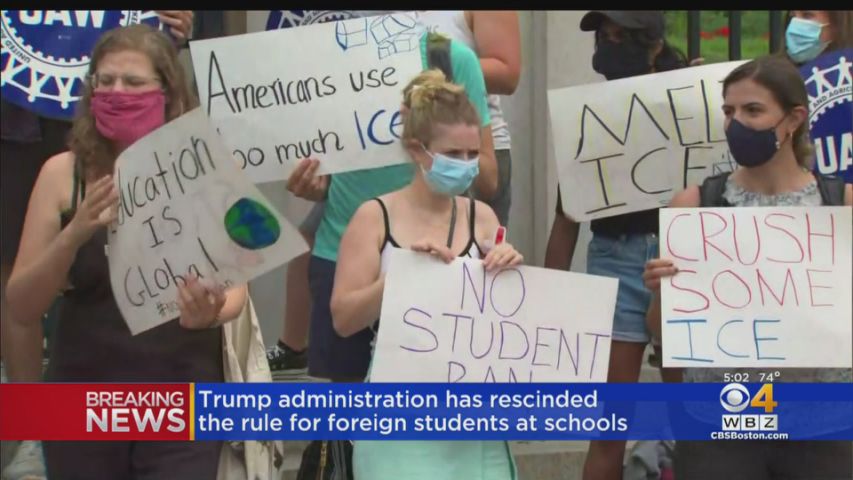