While Biden defends electronic bands as alternative to detention, advocates urge proper legal help for immigrants show up to court 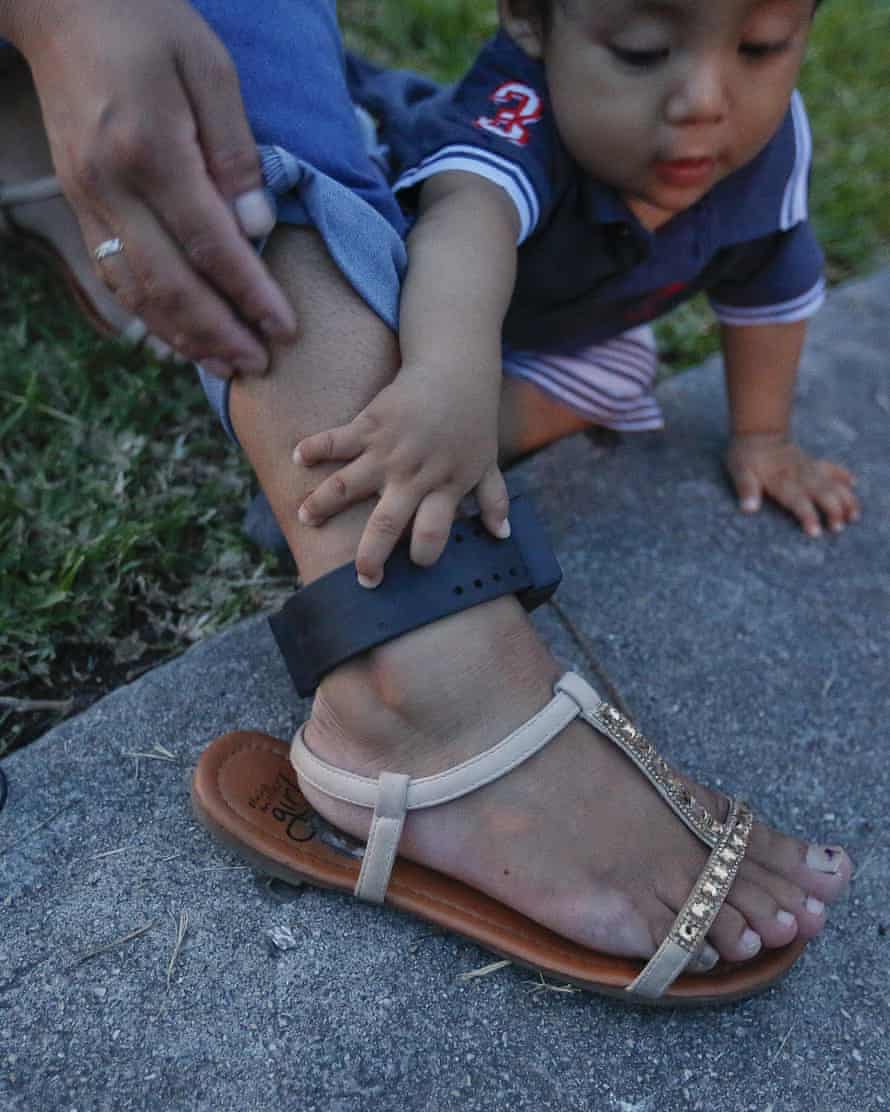 Immigrants in America who are forced to wear electronic ankle monitors suffer from an emotional, mental and physical toll, which includes trouble sleeping, mental health problems, problems at work and thoughts of suicide, a new report reveals.

The news comes amid an effort by the Biden administration to boost the use of the monitors as an alternative to putting people in brick-and mortar prisons as they await the outcome of their immigration cases.

The details are in Immigration Cyber Prisons: Ending the Use of Electronic Ankle Shackles, an upcoming report from the Benjamin N Cardozo School of Law, Freedom for Immigrants, and Immigrant Defense Project.

Immigrants interviewed for the report painted a dire picture of their lives under surveillance: 12% considered suicide as a result of being monitored, and 88% spoke of mental health issues, trouble sleeping, migraines and depression.

“I was really shocked when the findings came in with this report,” said Layla Razavi, deputy executive director of Freedom for Immigrants. She said that she had been familiar with ankle shackling for two decades and found the monitors harmful, but didn’t understand the extent of how “traumatizing and abusive” the practice was until she saw the statistics.

Electronic ankle monitors, which track geographical information, have long been used in the criminal justice system, and in the past 20 years, by immigration authorities. But as politicians are calling for the end of immigrant detention, and the Biden administration ends contracts to hold immigrants in local jails, the conversation is shifting to boosting funding and participation in US Immigration and Customs Enforcement’s alternative for detention, using the longstanding Intensive Supervision Assistance Program (Isap).

The program uses electronic ankle monitors and phone apps to track people who would otherwise be incarcerated.

For the 96,574 individuals enrolled in Isap in May 2021, 31,069 were wearing the ankle monitors. Immigrants tracked by Isap are required to be within 70 miles of their home, and they are usually not allowed to cross state lines.

BI Incorporated, a subsidiary of the private prison company GEO Group, has had a contract with Ice to provide the monitors since 2004. Its contract has been renewed three times, growing to $2.2bn last year. The company declined to answer questions about the ankle monitors and complaints from immigrants, and referred all questions to the Department of Homeland Security.

As GEO Group has heard demands to limit in-person detention become louder, it has increased its efforts to recommend its subsidiary’s monitoring business, including lobbying for Trump’s First Step Act of 2018, which requires individuals on home confinement to be subjected to 24-hour electronic monitoring.

The authors of the electronic monitoring report call the monitors “shackles”, invoking a ball and chain rather than a sleek Fitbit. Public officials have increasingly framed the use of the monitors as a better option than keeping immigrants detained.

Some 90% of participants in the report experienced harm to their physical health, including cramps, numbness due to impaired circulation, discomfort due to excessive heat from the battery and swelling. One in five individuals reported experiencing electric shocks from the ankle monitor, including one who went to the emergency room. Nearly all participants felt social isolation as a result of the monitor, with one interviewee calling it “a modern day scarlet letter”.

More than two-thirds of participants reported their families had experienced financial hardship because they had lost or had difficulty obtaining work as a result of their electronic ankle shackle.

Laura A worked as a wood manufacturer during the 11 months she wore the monitor in 2018.

Her colleagues noticed it beeping when she switched the battery and charged it. “Other people, immigrants, saw it and said authorities would show up and it would be my fault and that I shouldn’t work there. They were worried they’d be deported if it rang and Ice showed up,” she told the Guardian in a Spanish language interview.

Even after the monitors were removed, psychological effects persisted, the report said. Thirty-eight per cent of survey participants believed the impact of shackling on their mental health was permanent.

Máxima Guerrero, an activist and Phoenix resident, was detained during a June 2020 protest over the death of George Floyd when she said officers penned more than a hundred people into a closed-off area and arrested them all.

Guerrero is a Daca recipient, or Deferred Action for Childhood Arrivals, an Obama-era program for undocumented immigrants brought to the US as children, which keeps her safe from deportation. Her Daca status did not prevent her local police department, which has a contract with Ice, from contacting the agency about her arrest.

She was released with an ankle monitor and wore it for a month. She was called by Ice twice when it malfunctioned, inaccurately finding she was out of the area she was supposed to be in, when she was home or around the corner getting food. When she told her Isap case manager what happened, she was told, “There’s a mix-up in the system. Everything is fine.”

“But I wasn’t fine,” Guerrero told the Guardian. She is now seeing a therapist.

Many immigrants report difficulty sleeping because of the lights, alarm sounds and vibrations from the monitor’s battery, and the fear that it isn’t properly charged, which could lead to a call or visit from Ice.

Laura would wake up in the middle of the night with the alarm ringing, one of many battery glitches. Ice would call within minutes, asking her where she was. “It would frighten me so much, at one, two in the morning,” she said. Laura was given two batteries that were supposed to last eight hours charged each, but they would often last only two.

One Jamaican immigrant, who asked to remain anonymous out of concern for retribution from Ice, had to wear the monitor for 13 months during the Trump administration after being released from Ice detention.

His monitor malfunctioned four times, much to his chagrin. He got a job at a national shipping carrier, and would have to explain to guards why his ankle would ring when he went through metal detectors on a daily basis.

“I was never able to go through the metal detectors without specifically telling security: ‘Look man, I have an ankle monitor on my foot.’ And it was a different security guy every night you had to explain it to.” He said he worried constantly about charging the battery and being late to work.

Ice has long touted appearance rates at court hearings of Isap participants to justify its use of the program.

Report authors claim this data is flawed, and doesn’t establish that the monitors result in higher appearance rates than other types of programming and legal supports, programs that would be a better alternative to the monitor. They cited multiple instances where non-profits had worked with immigrants deemed high flight risks and provided them with legal representation. Almost 100% showed up to court.

“When they get that kind of support, they show up because people want to follow the legal pathway and adjust their immigration status. That’s the goal for almost all of these folks,” said Razavi.

The authors are demanding the Biden administration immediately wind down its use of Isap and remove monitors from individuals, but without locking them up. The White House referred questions about Isap to the Department of Homeland Security, which did not return requests for comment.

“The jury is still out on how the Biden administration will approach Ice’s shockingly failed program,” said Peter Markowitz, the co-director of Cardozo’s Kathryn O Greenberg Immigration Justice Clinic. “I hope they will look hard at this research and realize the profound harms of the program.”