The US’s ‘immigration crisis’ is admitting too few immigrants, not too many 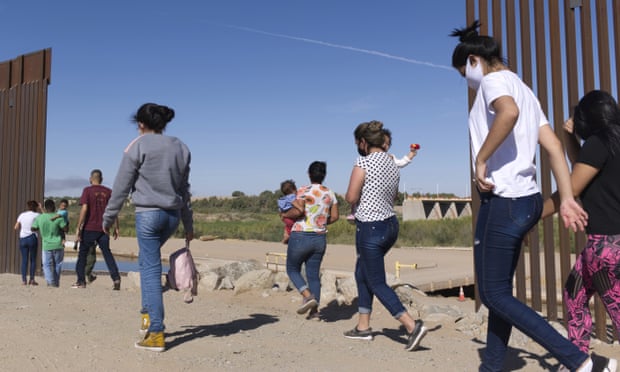 Florida governor Ron DeSantis’s cruel scheme to lure and transport vulnerable asylum seekers from the south to Massachusetts marks a new low in the immigration culture wars. The refugee crisis in our hemisphere demands bold and humane solutions, but the policy debate is frozen by the politics of fear and racism. Republicans grandstand about the issue for political advantage, while many Democrats would prefer to change the subject.

We propose a “Statue of Liberty Plan” for the 21st century that would set a goal for the US to become the most welcoming country on Earth for migrants and refugees and bring order and humanity to a dysfunctional system. The antidote to the venomous nativism that poisons our politics is to embrace immigration as a pillar of civic and economic renewal.

Expanded migration is necessary to fix a broken system that invites demagoguery. There are few accessible legal pathways for prospective immigrants. People who seek to come to the US wait in lines that extend for years or decades, or have no migration pathway at all. With no other options, migrants trek thousands of miles, risking death to seek asylum.

Under US and international law, people arriving in the US claiming persecution must have their cases heard; vulnerable migrants would be better off if they could seek refuge without having to undertake hazardous journeys across continents. The public would not be inflamed by scenes of disorder, and nativist politicians wouldn’t be able to use vulnerable people as political props.

Contrary to our national myth of being a welcoming nation, the US currently lags well behind Australia, Canada and other countries in the share of its population that are immigrants. Under our proposal, the US would admit 75 million immigrants over the next decade, which would double the foreign-born population from 15% to over 30%, giving it the largest share of any developed nation. Admitting 7.5 million people a year would be a dramatic increase compared with recent history – in the Obama years, the US admitted 1 million immigrants a year, and that number shrank dramatically under Trump.

Under our plan, immigrants could enter the US based on family ties or through a revamped humanitarian visa that would recognize factors such as economic hardship and the climate crisis as well as political persecution.

New immigration policy can only succeed with a new story about immigration that dispels historical amnesia. We tend to talk about migration as a matter of individual choices. Conservatives characterize migrants as threats while liberals talk about the positive contributions that migrants make. Both perspectives obscure the role of US foreign policy in installing and supporting repressive and authoritarian governments. Invasions, annexations, coups and mercenary wars are a bloody throughline in the history of US relations with Latin America. US corporations profit from extreme exploitation, while US trade and sanctions policies have increased poverty, notably in Venezuela where sanctions have increased extreme hardship.

The climate crisis is also a growing cause of migration. In Central America and the Caribbean, nearly a third of migrants in hard-hit areas cite climate-induced lack of food as the main reason for becoming migrants. The number of climate migrants will surely grow; the World Bank estimates that 216 million people worldwide will be forced to migrate by 2050.

Current US policy offers no path for people displaced by extreme weather events, desertification, or rising sea levels. The US contributes greatly to climate change, while countries in the global south are bearing the worst effects. We face a moral reckoning. Having burned down our neighbors’ houses, will we admit them when they seek refuge?

Even those who don’t agree that US policy plays a large role in driving migration should embrace our plan. The country’s population growth rate has flatlined. Population growth between 2010 and 2020 was the second lowest in the country’s history, largely because of declining birth rates among native-born Americans. We face a crisis of “age dependency” as the number of seniors rises dramatically relative to working age adults. Demographic decline is feeding a nationwide care crisis and imperils the sustainability of programs like Medicare and social security. Immigration is a necessary solution.

The absence of a progressive vision for immigration has fed a nativist consensus that has dominated our policymaking for too long. We now take for granted a vast, sprawling apparatus of border security that surveils and detains immigrants and generates profits for corporations who in turn finance the campaigns of nativist politicians. Studies show that left parties in Europe that embrace restrictionist views legitimize and strengthen the standing of the far right. The future of multiracial democracy depends on a new immigration paradigm.

Standing where we do today at a nadir in the country’s immigration debate, proposals to dramatically increase immigration levels may seem far-fetched. But the political consensus rest on a faulty assumption that only a “get tough” posture on immigration is viable.

In fact, the public’s reaction to the cruelties of the Trump era was to reject nativist policy making. For the first time since 1965, more Americans believed in 2021 that we should increase immigration levels than those who thought we should admit fewer. Organizations like Welcome.US have organized thousands of Americans across the political spectrum to assist Afghan refugees, while people in New York City and Martha’s Vineyard opened their arms to welcome asylum seekers cynically sent to them by DeSantis and the Texas governor, Greg Abbott.

The policy and politics we urgently need will be built by the actions of millions of Americans to welcome new immigrants.

… as you’re joining us today from France, we have a small favour to ask. Tens of millions have placed their trust in the Guardian’s fearless journalism since we started publishing 200 years ago, turning to us in moments of crisis, uncertainty, solidarity and hope. More than 1.5 million supporters, from 180 countries, now power us financially – keeping us open to all, and fiercely independent.

Unlike many others, the Guardian has no shareholders and no billionaire owner. Just the determination and passion to deliver high-impact global reporting, always free from commercial or political influence. Reporting like this is vital for democracy, for fairness and to demand better from the powerful.

And we provide all this for free, for everyone to read. We do this because we believe in information equality. Greater numbers of people can keep track of the events shaping our world, understand their impact on people and communities, and become inspired to take meaningful action. Millions can benefit from open access to quality, truthful news, regardless of their ability to pay for it.